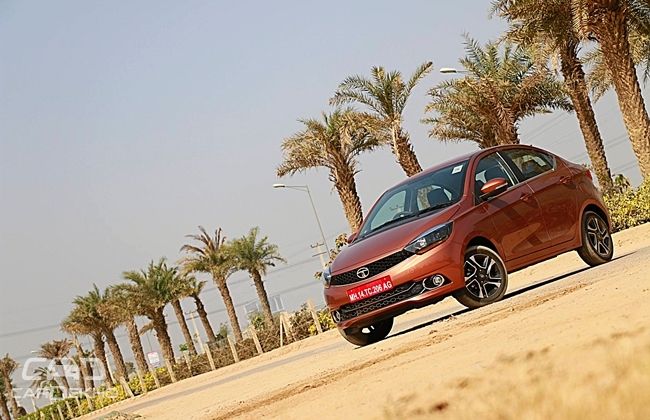 The compact sedan segment has traditionally seen products that offer the ‘feel’ of a sedan with their three-box design but lack the experience associated with a proper midsize sedan. The all-new Tigor from Tata Motors is hoping to change that. But this Tiago-derived hatchback is one of the smaller packages in the market. So, how does it intend to stand out from the crowd and be noticed in a segment filled with capable competition?

"The Tigor should thus make for a good buy if you want a comfortable, spacious and efficient city car that can also manage short weekend trips. "

The Tigor comes loaded with most features buyers look for though its engines are not as powerful, especially the diesel. However, it actually betters them in two key areas that matter to buyers in this segment, namely space and comfortable ride. With these virtues and its eye-catching design, the Tigor thus creates a new niche for Tata Motors.

The Tigor is a breath of fresh air in the compact sedan space. Traditionally sub 4-metre sedans have been cars made to look like a sedan by adding a boot to a hatchback. The Tigor, on the other hand, is thoughtfully designed. It looks eye-catching, particularly from the rear, and its swooping rear even reminded us of the BMW X6.

The front end is the same cheerful-looking face from the Tiago, though there are a few changes. The grille uses a new hexagonal pattern and the headlights get a smoked treatment. We only drove the top end variant, the XZ, and Tata Motors has not revealed the number of variants or the difference between features, though the XZ gets a double-barrel layout and projector beams. Given the similarity of the design from the front, it is difficult to tell from a distance whether you are looking at the Tiago or Tigor. Daytime running lamps have been given a miss, probably to keep costs in check.

The difference in design can be noticed from the B-pillar onwards, since the Tigor’s rear half is completely new. The Tigor is longer than the Tiago by 276mm, and that isn’t down to just the boot. The Tigor also has a longer wheelbase to increase the space in the backseat, and there are larger doors for the second row to make getting in and out easier too. Along with the rolling roofline, the Tigor actually looks like a much more expensive car thanks to the coupe-like design.

The rear three-quarter is the best angle to look at the car from, especially with the design of the tail lights and chrome strip running across the width of the bootlid and into the tail lamps. The roof-mounted spoiler integrates an LED strip across its width for the stop lamp and looks good too.

On the whole, the Tigor is easily the best looking sub 4-metre sedan, while a ground clearance of 170mm adds to its stance, offering a crossover-like feel visually. Difference between the petrol and diesel are the diesel’s smaller 14-inch wheels as compared to the petrol’s 15-inch ones.

There is a familiar feel to the interior as it is derived from the Tiago. The dashboard design is the same, though there are changes to differentiate the two. The centre console houses a 5-inch colour touchscreen and even has a reversing camera functionality. The XZ also gets automatic climate control and it is excellent at cooling the cabin, but it is a bit loud even at the lowest fan speed. The placement of the air-conditioning switches is a bit odd, as there is a lot of empty space in between. Air-conditioning vents at either end of the dashboard are colour-coded and are the same colour as the car’s exterior.

The glovebox is cooled. Clocks are the same as the Tiago’s, and are housed in the same silver-coloured pods as the Tiago. The steering wheel is the same too and so is the gear lever, though seat covers are different. The Tigor gets an additional 12V socket that sits between the front seats, next to the handbrake lever, apart from the one on the centre console next to the USB/AUX ports.

Door panels get fabric inserts, though they could have done with some more padding, and the black colour feels dull too. The grey colour of the plastics also feels dull. There are more cubby holes to keep your phone, wallet or loose coins. The highlight of the interiors, though, is the backseat. Wheelbase is longer than the Tiago by 50mm, which has translated to more space inside, particularly rear leg and knee-room.

The seatback angle is reclined further than the Tiago, and the rear seat feels more comfortable as they stretch from pillar to pillar. The well-cushioned seats and the inclusion of a centre armrest add to the sense of comfort.  At 5 feet 11 inches tall, and even with the driving seat set to my requirements, there was good knee-room for me at the back, which is very impressive in a sub 4-metre car. Headroom at the rear is good though, and the seat is wide enough to seat three reasonably sized adults.

The front seat feels comfortable too, and the XZ variant also gets height adjustment for the driver’s seat. The front passenger seat is too tall though, and I could almost feel my head touching the roof.

The cabin feels noisy though, as there is road noise, engine noise and wind noise seeping into the cabin. A quieter cabin would make the Tigor’s rear seat an even better place to be in, besides reducing tiredness over long distances.

Tata Motors has offered some of the best audio systems in recent times thanks to its collaboration with JBL, and the Tigor benefits from the same. Sound quality on this XZ variant with four speakers and four tweeter setup is excellent. The steering features the same controls as the Tiago and you can control music and volume and even take phone calls. The colour touchscreen gets a slightly tweaked interface as compared to the Zest and the Tigor also gets Android connectivity through a dedicated app that can be downloaded from Google’s Play store for free.

There’s GPS navigation via smartphones as well, and once you download the navigation app (bundled with Tata’s ConnectNext app suite), you can authorise up to four devices for navigation. The car also gets a service app to manage service schedules and history, an emergency app that sends out critical details in the event of a crash, a Juke-car app to control and share music, along with a visual guide to help understand various functions in the car. The Tigor also gets dual tripmeters, current and average efficiency details, distance to empty readout and a new digital gear indicator that also tells you when to shift up or down.

The Tigor does not get the usual boot release lever placed under the driver’s seat, but gets a release button on the centre console. However, the release button works only when ignition is on, which means you cannot open the boot if the ignition is off but the key is still in the ignition slot. There is no external release button, and you can open the boot from the outside by either inserting the key into the slot on the boot or by pressing the light button on the key fob. The XZ variant also features rear parking sensors and a reverse camera.

We drove both the petrol and diesel versions, and the engines and transmissions are the same 1.2-litre 3-cylinder Revotron and 1.05-litre 3-cylinder Revotorq from the Tiago mated to five speed manual gearboxes. Power and torque figures are the same as the Tiago’s, at 85PS and 114Nm. The diesel remains unchanged too, offering 70PS of power and 140Nm of torque. However, as the Tigor is heavier by 40 - 50 kgs, the gearing has been tweaked to offer the right kind of drivability.

On the road, the engine feels smooth and is quiet at idle but gets a bit noisy as you rev it. The petrol engine is the better pick in this lineup as it feels livelier even at low speeds.  Throttle response is quicker at part throttle, which should make the petrol easier and more comfortable to drive in city. However, the petrol uses gear ratios that are aimed at getting good fuel efficiency and that saps some of the engine’s peppiness. For instance, you can almost hit a speedo-indicated 140kph in third gear alone!

Being more powerful, it also felt quicker to accelerate, and also has a better torque curve since its power does not taper off as sharply as the diesel’s. It also feels quite at ease while cruising on the highway.

The diesel feels quite dull to drive. It is at its peppiest best in a very narrow window. Turbo lag is apparent below 2000rpm and you feel some of the turbo’s effect at around 2200rpm, but it tapers off just after 3500rpm. Any time you want to go faster, whether in the city or on open roads, you will have to work the gearbox. Gearshift quality in the diesel is also not as good as in the petrol, especially when shifting from second to third gear.

Petrol and diesel both get Eco and City driving modes, like the Tiago, and Tata says the modes have been tweaked for a better experience.

The ride quality has to be one of the Tigor’s biggest highlights. The suspension offers a very good combination of ride and handling, especially the diesel, which runs on 14-inch wheels. It soaked bumps and potholes extremely well, and while both versions do not lose their composure over bad roads, the diesel offers a better ride with lesser up-and-down or side-to-side movements. The petrol uses 15-inch wheels and tends to cause more movement on broken roads, though ride quality is very good.

The Tigor is impressive in terms of handling too. The suspension offers confidence when driving sportily or going fast around corners. The steering has a nice weighted feel, and it is not too sharp in terms of responses, but the suspension adds to the confidence. The petrol feels more confident with its bigger wheels and a slightly more responsive steering, as it is lighter than the diesel by about 70kg. Brakes feel good, though we would have liked some more initial bite. Stability under hard braking is better in the petrol.

The XZ variant gets ABS with EBD along with body stability control and two airbags. We do not know if these will be standard on lower variants – we should get confirmation on that when the car is launched on March 29.

The Tata Tigor is available in four variants - XE, XT, XZ and XZ(O).