Maruti Suzuki launched the Swift in India in May 2005. In its 12 years in the country, the Swift has remained the preferred choice in its segment. In order to reach here, it has honed its position as a sporty hatchback that offers something for everyone. And now, there’s a new Swift 2018 and it has big shoes to fill. It has to excel at everything that the outgoing model does and is expected to add more feathers to its cap at the same time. Does it do all that? We took it out for a spin and here’s what we think. 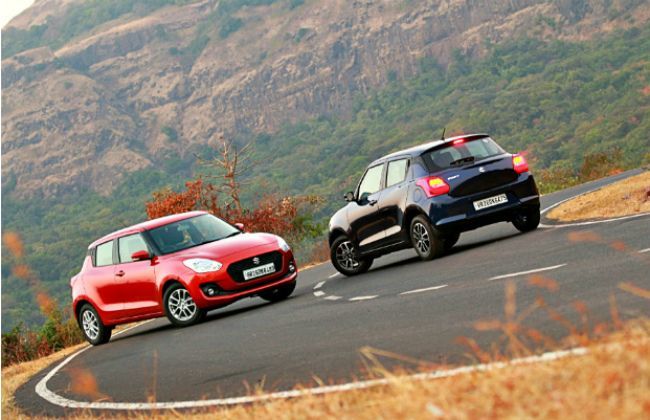 This is for the first time in the 12 years of the Swift that Maruti Suzuki has introduced its compact sedan sibling, the Dzire, first, which gave us an idea of what to expect from the new Swift. ​​​​​What was unexpected is how Maruti Suzuki has given the Swift its original sporty character that takes this hatchback off the safe path that Maruti could have chosen to follow. The big question, then, is – is the third-generation Swift better than the one that it replaces?

"The new-gen Swift, then, is a package that is as sensible as it is exciting."

While the Swift has become more practical thanks to better space, features and a bigger boot, it has now also become more fun to drive. Yes, the base L variant does skimp on equipment and the top-end Z+ variant does not get AMT just yet. But overall, the Swift 2018, continues to be what it already was - sensible and exciting. Perhaps, some more now.

The Swift and the Dzire have been near identical twins in the past in terms of their frontal appearance, with only minor differences in the grille design.

The new Swift too follows suit. The headlamps, for example, are exactly the same. The bonnet and the front fenders too, are designed in a similar fashion. But, this time around, that’s where the similarities end.

While both the Swift and the Dzire get a hexagonal front grille, the one on the Swift is bigger and doesn’t get any chrome outline. As a result, the Swift looks less bulky and more aggressive. The design of the front bumper of the Swift is also different when compared to the Dzire. While both the cars get round fog lamps, the Swift gets a thinner air dam that runs across the bumper merging with the fog lamp housings on both sides which adds a touch of sportiness.

A concealed rear door handle makes the Swift look like a 3-door hatch from the side. It does give it a clean look but it’s not the most conveniently positioned door handle.

The blacked out A-pillar on the new Swift is quite upright in comparison to the new Dzire, where it is more raked and body-coloured. So both these cars look dissimilar in profile now, as against their previous generations.

The Swift never looked as good from the rear as it looks now. The proportions of the rear windscreen to the metal (on the hatch) to the plastic (bumper) appear just right now with no ungainly mass. The Swift also happens to be the first car under Maruti Suzuki Arena to not get variant badging anywhere. There’s only the DDiS insignia on the front fender of the diesel version.

The Swift gets an all-black cabin with deep grey inserts on the dashboard and the steering wheel. While the cabin does look sporty and better put together than before, it’s still very much like other Maruti Suzuki cars in terms of the plastic quality and materials used. An important thing to mention here is that the dashboard design now is not a carbon copy of the Dzire. The aircon vents in the middle, for example, are circular in shape in the Swift while they’re trapezoidal in the Dzire. The aircon knobs of the Swift are also circular and different from the ones on its compact sedan sibling. These are also more premium-looking and can be operated without taking eyes off the road. Overall, even though the Swift shares a lot of interior components with the Dzire, it’s now unique in its own ways.

The front seats are very supportive and are cushioned at the right places -- around the back, shoulders and the lumbar. The driver’s seat is adjustable for height but the steering is only adjustable for rake. A telescopic steering would have been a welcome addition, especially since taller drivers can take the liberty to stretch their legs further, thanks to more leg space at the front compared to the outgoing model. The view out from the front seat is excellent with the upright A-pillar not hindering side vision at all. Turning the Swift or parking it front-first will be easy for most drivers.

Lack of knee room at the rear was one of the shortcomings of the previous generation Swift and that has been addressed in the new version. Thanks to the new Heartect platform, there’s more space inside the cabin as the wheelbase has improved by 20mm. It is now possible for two adults, at least 5’8”, to sit one behind the other without compromising on rear knee room. The boot space has also improved by 58 litres although the loading lip is inconveniently high.

The Swift continues to be powered by the same set of engines with the same output. The manual transmission too, is the same. The new addition here is the 5-speed AMT, which is available on the V and Z variants of both - the petrol- and diesel-powered Swifts. Both the engines retain their inherent characteristics - the petrol being the smooth and relaxed one that charges up as it goes past 4,000rpm and the diesel being the more torquey and fuel efficient of the two that unleashes as the turbo kicks in post 2,000rpm. The manual Swift continues to be an enjoyable car with a light clutch and short-throw gearbox. But it’s the AMT that’s the talk of the town.

The AMT or the AGS, as Maruti Suzuki likes to call it, is finally the gearbox that can manage most of the driving situations on its own whether it is a hill, slope, flat, rough, choc-a-bloc or an open expressway. The shift responses are now quick and it understands throttle inputs better now. The usual AMT headnod accompanied by gearshifts has also reduced with the only exception being upshifting at high revs and downshifting the diesel engine in its peak torque zone. A point worth mentioning here is that the AMT gear lever in the new Swift is one sophisticated looking unit (in terms of design) with short throws.

The new Heartect platform has worked wonders for the new Swift and it now feels more composed than ever while doing triple-digit speeds and taking curves. Although the Swift has shed some weight, it feels more planted than before in both the diesel and petrol avatars. The steering is light and it isn’t the most communicative of units, but it doesn’t feel vague and requires no idle inputs to maintain a straight line. The light steering though will be enjoyable while parking and at city speeds.

What comes as a surprise is that Maruti Suzuki has resorted to a rather firm suspension setup for the third generation Swift. Except when driven over really poor roads, the relatively stiffly sprung Swift feels more confident and very controlled on the road. Over very rough surfaces, you feel the thuds clearly in the cabin. By no means is the ride uncomfortable, but it isn’t as supple as the Baleno either.