The new flagship SUV from Audi is powered by a 3.0-litre diesel engine 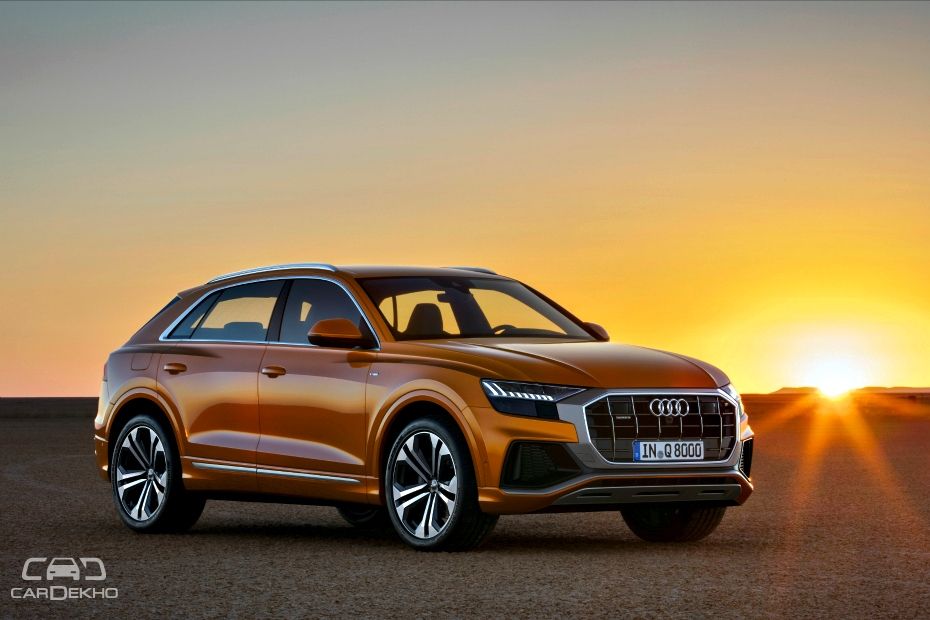 Audi showcased the Q8 concept at the 2017 Detroit Auto Show. And now, 16 months later, the German carmaker has unveiled the production-spec Q8 SUV. As the name suggests, it will sit above the Audi Q7 and will be the brand’s new flagship SUV.

At 4990mm x 2000mm x 1710mm (LxWxH), the SUV coupe from Audi is 62mm shorter in length, 32mm wider and 30mm lower, compared to its younger sibling, the Q7.  It has a wheelbase of 2987mm, 7mm lesser than the Q7, and a luggage carrying capacity of 650 litres with the seats up and 1,755 litres with them down. In comparison, the Q7’s boot has a capacity of 770 litres with the third row folded. This can be expanded to 1,955 litres with the second row seats folded. Clearly, the Q8 is not aimed to be a full-size luxury SUV, but rather a lifestyle vehicle. 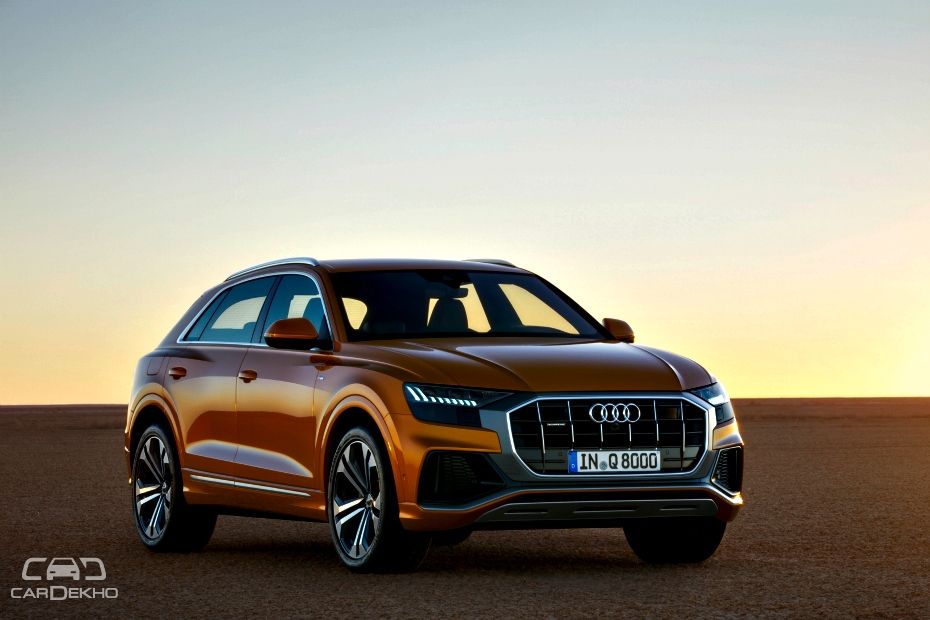 The production-spec Q8 looks quite similar to the concept. The front is dominated by a large grille flanked by sleek LED headlamps at the upper end and large air vents at the bottom. Compared to the existing Audi SUVs in India, the Q8’s front looks quite busy. The rear is unmistakably European, though, with neat horizontal lines from one end to the other. The way the tail juts out at the base of the rear windshield, reminds us of the Lamborghini Urus. The connected tail lamps look inspired from other modern Audis like the new A6, A7 and the A8. 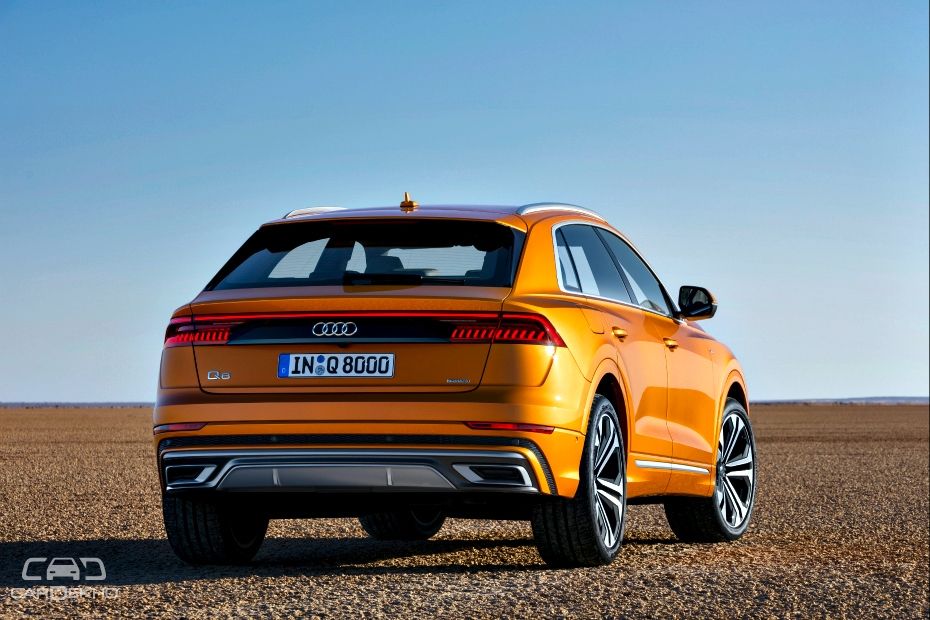 On the side, Q8 is quite different from any other Audi SUV that we have seen so far. It has a drooping coupe-like roofline and a disconnected shoulder line that adds muscle to the front and the rear portion of the Q8. 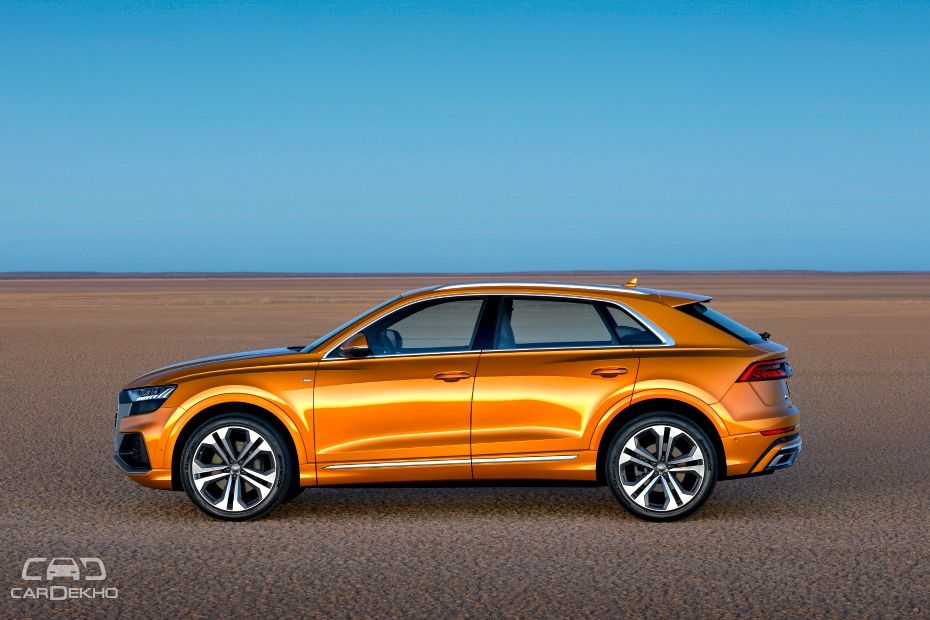 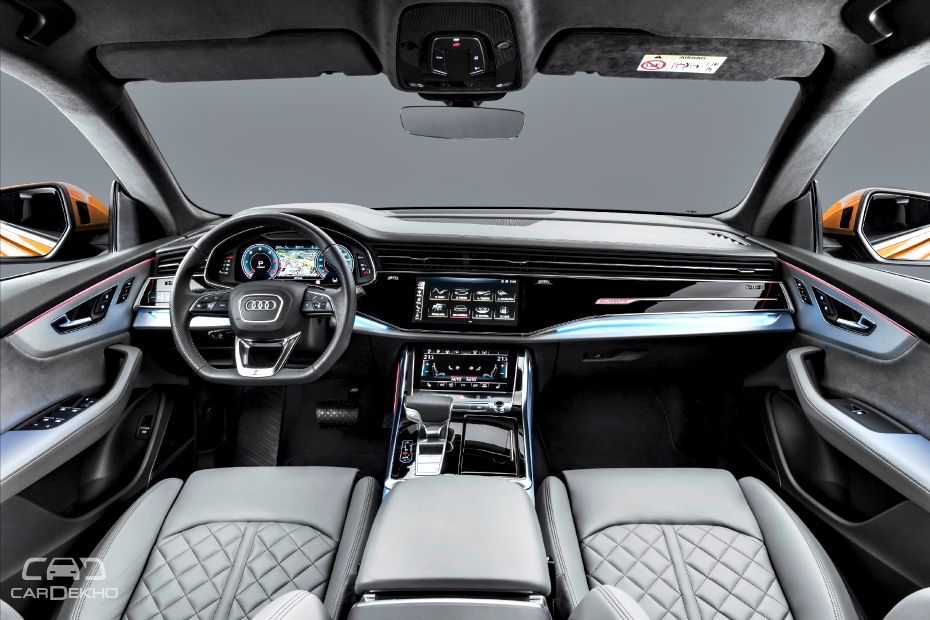 On the inside, the Q8’s dashboard design appears inspired by the new-gen Audi A8. It gets two screens for controlling all the functions inside the SUV. The first screen, a 10.1-inch touchscreen unit located in the piano black dashboard, has infotainment and navigation readouts. The second, an 8.6-inch unit placed on the central tunnel, controls the heating, air conditioning, convenience features and takes text inputs. The Q8 also gets the fully digital Audi virtual cockpit. Its 12.3-inch display can be switched between two views via the multifunction steering wheel. In addition, the Q8 gets a Bang & Olufsen 3D Sound System and Audi connect data transfer module with the LTE Advanced and a Wi-Fi hotspot as standard. 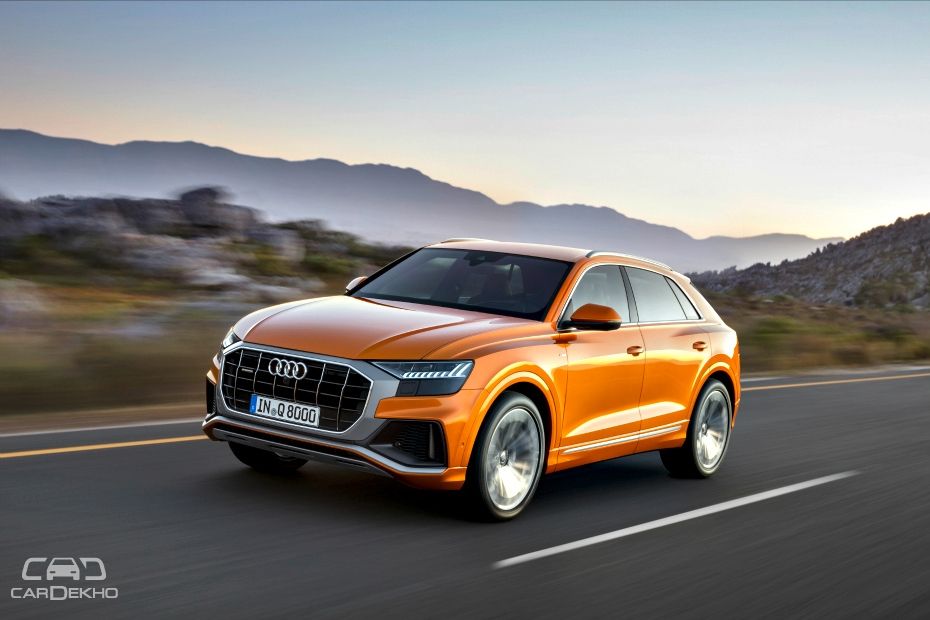 Like the A8, the Q8 is also equipped with a host of driver assistance features like adaptive cruise assist, efficiency assist, crossing assist, lane change warning, curb warning and 360-degree cameras. Set to be introduced in early 2019, the remote garage pilot feature will allow the driver to guide the SUV into a garage and back out again autonomously, using the myAudi app on a smartphone. 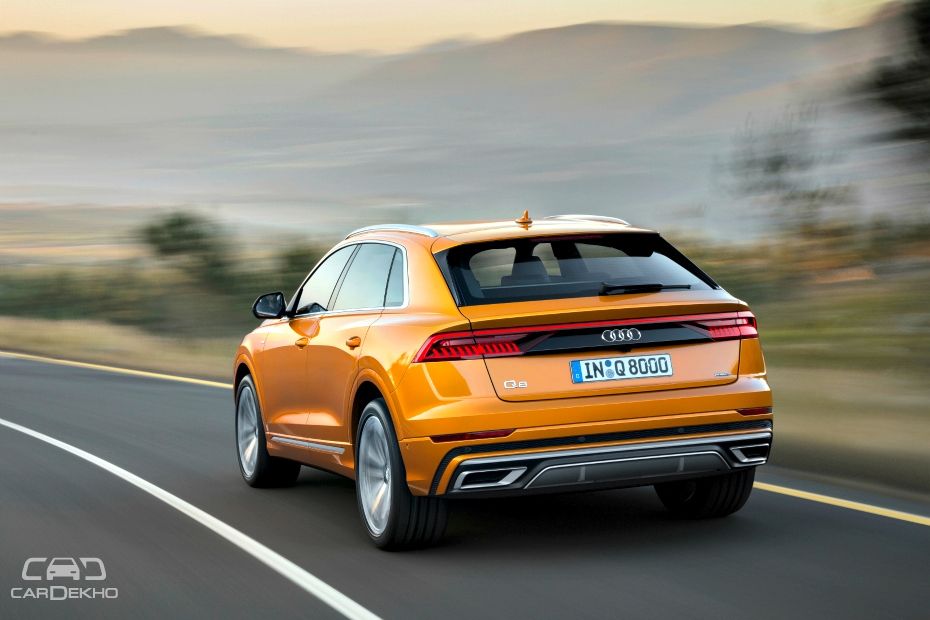 Initially, the Q8 will be offered with a 3.0-litre V6 diesel engine that makes 286PS of maximum power and 600Nm of peak torque, coupled to an 8-speed automatic transmission. Audi claims that it will make the Q8 go from 0-100kmph in little over 6 seconds. Eventually, Audi plans to offer the Q8 with a 3.0-litre petrol engine too.

Audi has also introduced a new 48-volt primary electrical system on the Q8. During braking, it can recover up to 12 kW of power and feed it back into the battery. The mild-hybrid technology (MHEV) enables long coasting phases with the engine deactivated and a start-stop range that begins at 22kmph. Related: New Audi A7 Sportback Introduced, Gets Mild Hybrid 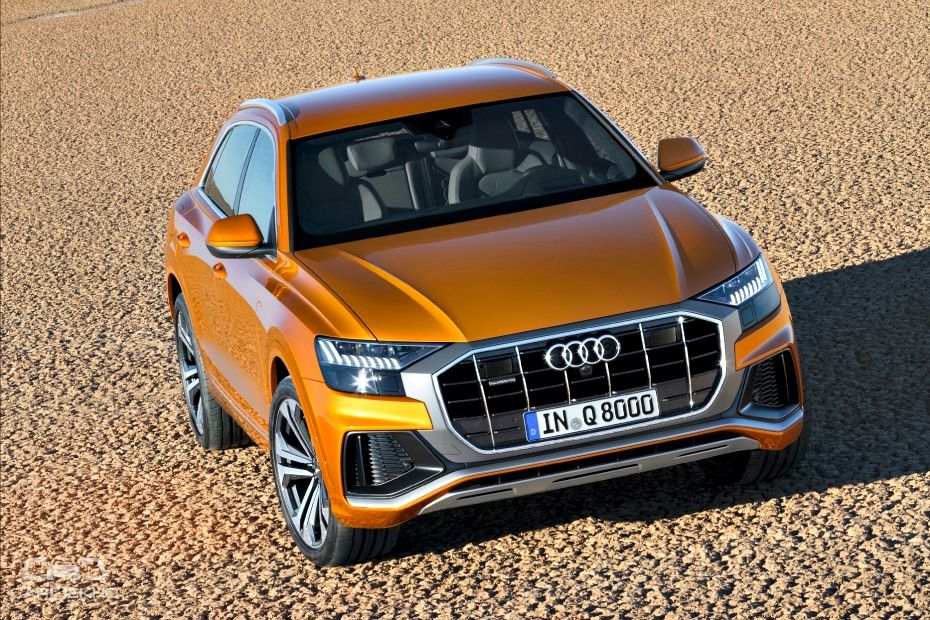 Being an SUV, the Q8 is also equipped with Audi’s Quattro all-wheel-drive system that splits the power in 40:60 (front:rear) ratio as standard and, if required, Audi says, it can transfer the ‘majority’ of power to the axle with better traction. For better agility and stability, the Q8 will also be available with an optional all-wheel steering which will turn the rear wheels by as much as 5 degrees either way depending on the speed of the car -- opposite to the direction of the turn at low speeds and in the direction of the turn at higher speeds. To keep the passengers comfortable while on an off-road adventure, the Q8’s suspension comes with damper control as standard. However, buyers can also opt for adaptive air suspension with controlled damping with either comfort or sport setup. Thanks to this, the Q8’s ride height can be adjusted by as much as 90mm, taking the maximum ground clearance up to 254mm. 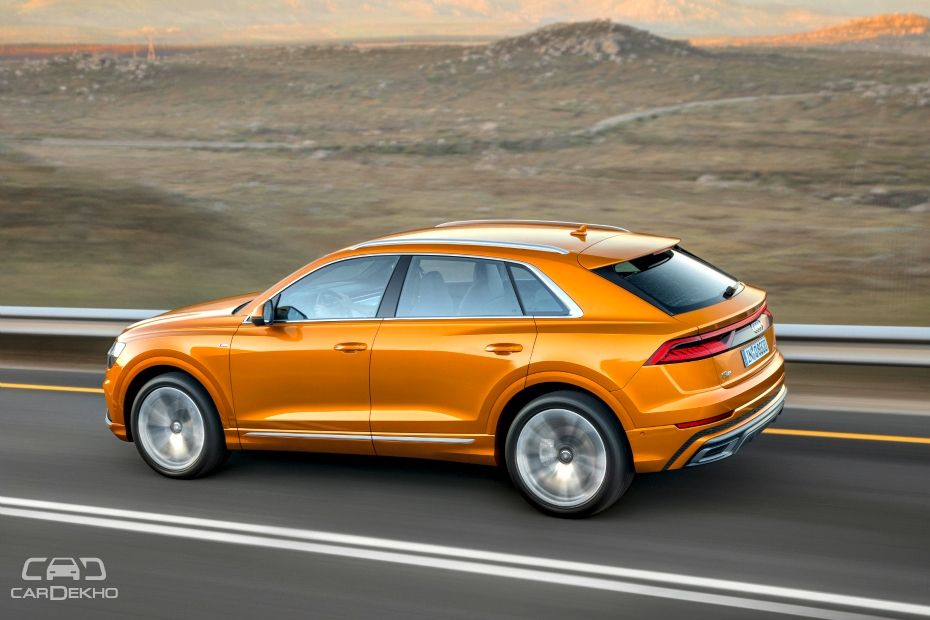 The Audi Q8 has already been spotted testing in India quite a few times. So, expect the German carmaker to launch its new flagship here soon after its international debut in the third quarter of 2018. When launched, the Q8 is expected to be priced around Rs 1 crore and will compete against the BMW X6.