Hyundai has introduced the mid-life refreshed/facelift model of the Creta. The updated model has been launched post three years of the introduction of the pre-facelift compact SUV. The Creta has always been a strong package mechanically, so its powertrain options remain as is.  There are aesthetic changes to freshen things up along with additional features with this 2018 facelift. 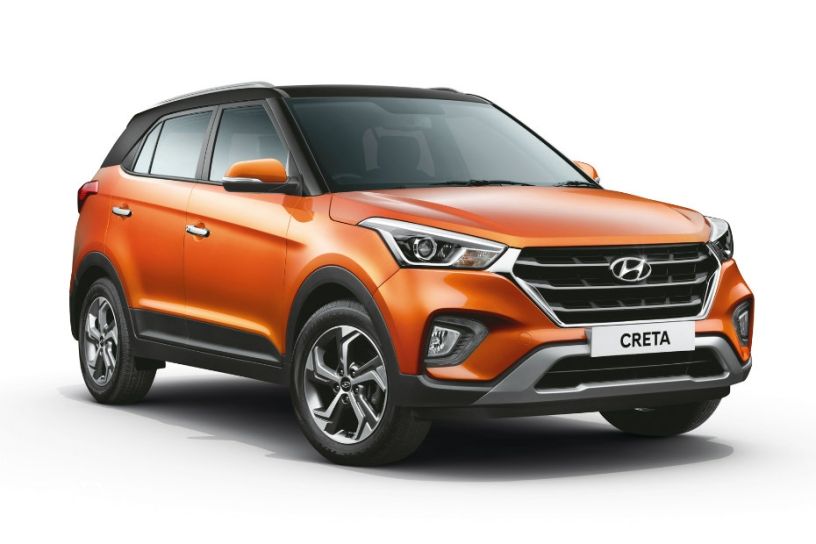 In our books, the Creta facelift continues to be one of the best options in the compact SUV space both for the city, highway and rough roads. It offers competent powertrain options as well and packs more than what you ask for in the segment. Hyundai has even dropped prices of several mid-spec variants of the updated Creta compared to the pre-facelift model.

"With several new features, the Hyundai Creta 2018 has become a stronger package than ever! "

The first thing that strikes you about the 2018 Hyundai Creta’s design is how it looks like a traditional, boxy SUV. While rivals like the Maruti Suzuki S-Cross and Renault Captur are crossovers, the squared-off edges of the Creta give it a distinctive appeal. That’s not all - with a height of 1630mm, the Hyundai Creta is also among the tallest SUVs in the segment, helping it give you that desirable road presence. And yes, with 190mm of ground clearance, you can handle the rough stuff when needed.

Also, the new Creta sports the Hyundai family grille. The revised grille gets a broader chrome accent around it that merges into the headlamps at the top corners. The headlamps are also an all-new design even though they fit in the exact same recesses. The DRLs have now shifted down to the mildly re-designed front bumper and surround the fog lamps. When viewed from the side, the only change is a new set of 17-inch five-spoke machine-cut alloys wheels that are quite nice, and the roof rails that now sit flush with the roof.

At the rear, the changes are also quite subtle with redesigned tail light units and a rear bumper that no longer joins up to the body in a straight line, with beefier plastic cladding on the outer edges. Hyundai could’ve used the facelift to add some more flair to the design, by incorporating LED elements in the headlamps or taillamps. Overall, the cosmetic updates to the new Hyundai Creta are subtle but they do help the SUV look more distinctive, especially if you opt for the new Passion Orange and Marina Blue paint shades.

If it isn’t broken, don’t fix it. That simply describes the changes to the interior of the new Creta. For instance, getting in and out of the Creta is quite easy, since it doesn’t sit too high up from the ground. The only things that get in the way are the thick side sills, which make getting in or out of the car a little tricky for senior citizens.

Once inside, you’re welcome by a cabin that balances styling with sensibility. The black and beige two-tone interior is still offered and those opting for the SX Dual Tone can have an all-black interior as well. Premium touches of leather on the seats, armrest, steering and gear lever, join hands with well-built and smooth-to-touch plastics to give you an upmarket experience. You do feel like you’re getting your money’s worth.

A cherry on top is that the Creta not only gets the styling of an SUV, it also gets that commanding driving position, so you can see over the bonnet from the driver’s seat. The driver will also have a hassle-free experience when it comes to usability, since the car is ergonomically sound. Every button, every dial and every stalk is exactly where you expect it to be and even customers new to Hyundai cars won’t need much time to get familiar. While finding a good driving position is easy, we do wish Hyundai offered both reach and tilt steering adjustment, and not just the latter.

The Creta is also a spacious car and offers good overall headroom, legroom and knee room, while the seats are supportive even of large frames. Seating two six-footers one behind the other is easy. That said, the rear shoulder room is average. Less than even the Hyundai Verna’s, in fact. So the Creta is not a very good 5-seater but makes for a good 4-seater.

It’s also a practically laid out cabin, with cupholders in between the front occupants, storage under the front armrest, door bins that can hold 1-litre bottles and a 402-litre boot. For additional storage, the rear seat folds down as well.

On the dash, on the driver's left is the start stop button and on the right are control switches for traction control, instrument cluster illumination and headlamps levelling to set the throw of the headlamps. The key less system is a really smart unit which not only detects the presence of the key in the vicinity but also detects if it is inside or outside the cabin. You can access the car by a request sensor on the driver's side door. Just click the black button and it detects if the key is around to unlock the car. There is no need to pull the key out of your pocket. Once you are in, just hit the clutch with the start-stop button to bring the car to life.

As you’d expect from a Hyundai, the Creta 2018 comes equipped with a rich list of features. Standout features include wireless phone charging, a smart key band, a powered driver seat and an electric sunroof. Of course, you also get segment staples like steering-mounted audio and phone controls, cruise control, auto AC with rear AC vents, a smart key with push button start and an auto-dimming interior rear view mirror.

However, these are some strange feature omissions. Auto headlamps and auto wipers aren’t offered on any variant, while ISOFIX child seat mounts are exclusive to the SX automatic variants.

The petrol engine on the Creta is the 1.6L VTVT unit carried over from Verna. This engine churns out 123PS of power and 151Nm of torque. The diesel Hyundai Creta impressed us with its refinement levels but the petrol is simply phenomenal. You can barely tell if the motor is running, since it runs butter smooth even at startup.

This engine offers adequate performance. Much like it is in the Verna, the engine doesn’t do anything to excite. It offers easy driveability in the city but needs you to apply a calm driving style. To really get the performance out of this motor, you do have to push it but that will take its toll on fuel efficiency.

Even on the highway, it’s best to pick a lane and stick with it. High-speed overtakes will take some planning and you will have to stick to lower gears on inclines as well, especially if you have passengers on board. Like the 1.6-litre diesel, this engine comes paired with a 6-speed manual gearbox as standard, but can be had with a 6-speed automatic transmission itself.

Hyundai hasn’t changed too much in the engine except for a tune-up that has reportedly improved fuel efficiency by 4 per cent, to 20.5kmpl (19.67kmpl for the old car). When it comes to the performance of the 1.6-litre diesel engine it’s still the most powerful in the class with 128PS@4000rpm and 260Nm @1500-3000rpm, and so there was little need for Hyundai to change it.

In town the engine is happy to potter around in 2nd or 3rd gear with enough power to smoothly accelerate away if needed. On the highway you want to try to keep the engine spinning around the 2000rpm mark where it’s happiest at, and there is still ample power to make a quick overtaking manoeuvre when necessary. In our real-world tests, the Creta took 10.83 seconds to go from 0-100kmph while 30-80kmph (in 3rd gear) took just under 8 seconds.

The 1.4-litre diesel Creta is primarily a city car. It offers decent low speed torque and it does let you upshift early. It offers good daily driveability but it’s still a commuter engine, nothing more. Out on the highway, the motor runs out of breath and shifting down the 6-speed manual gearbox and revving it hard is futile. It’s best to enjoy cruising with this engine.

Since there have been no mechanical changes to the Creta, it displays fairly similar driving dynamics. In town the suspension does a reasonable job of isolating occupants from small and medium bumps. For large speed breakers there’s more than enough suspension travel to take them without any fuss or crashing noise. That said, over sharp bumps like level changes, expansion gaps and potholes, you can tell that the suspension is set slightly on the firm side as some of the bumps makes it through the cabin, accompanied by some complaints from the suspension. The steering and clutch are light and typically Hyundai so driving around town is an effortless affair. There’s ample stopping power on offer as well as our braking tests saw the Creta go from 100-0kmph in 43.43 metres. However, typical of Hyundais, the initial bite isn’t very sharp. It’s very progressive so especially at high speeds, you will have to press the pedal harder than you would have to in, say, the Maruti S-Cross.

There are six variants of the Hyundai Creta, starting with the E, the E+, S, SX, SX (Dual Tone) and the SX(O). 6-speed conventional automatic transmissions are available in the S & SX diesel and the SX petrol.