The new Ford EcoSport receives a mild facelift and the changes under the skin are what make a significant difference in the package. Gone is the critically acclaimed and award winning 1.0 EcoBoost engine that couldn’t find favour with Indian customers. The other 4-cylinder petrol has also been axed and in its place is a new 1.5-litre, 3-cylinder petrol that is lighter and promises to be more efficient as well. The new automatic transmission also assures to offer petrol buyers a smoother drive in the city. Ford also promises the cheapest cost of ownership in the class and this could be just the boost that the EcoSport needed to regain the ground it’s lost since it was launched in 2013. 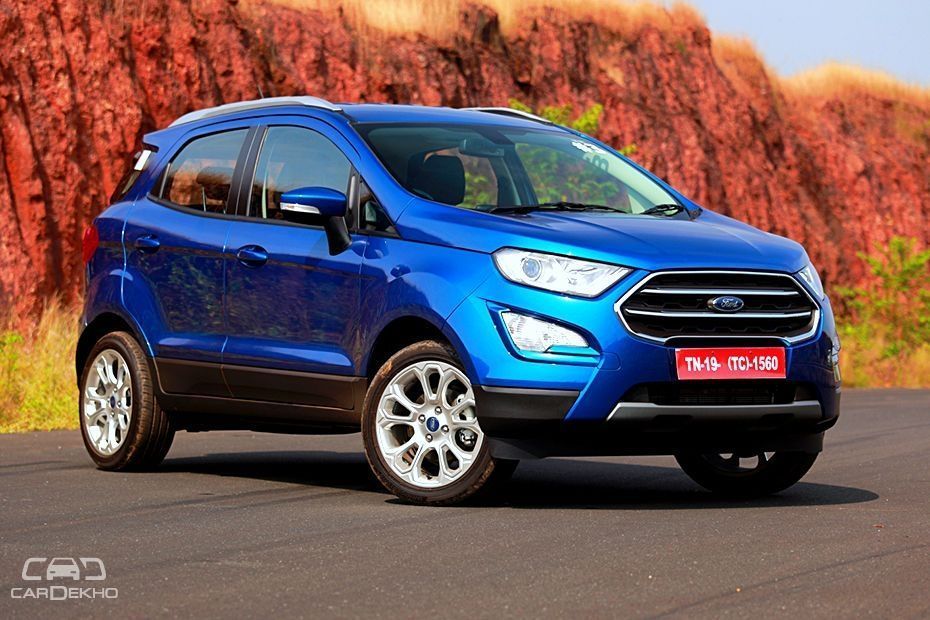 The addition of the new petrol engine and smooth automatic transmission have made the new Ford EcoSport lineup a lot more desirable. And the technology package has further brought it on par with the competition. Ford says that it has increased the level of localisation in the car from 60-65 per cent to nearly 85 per cent, and this has helped in pricing it very competitively.

"While on the surface, the changes seem small, they have made a great deal of difference to the way the new EcoSport drives and feels."

To top it all, the company is even promising that it will cost between 7 to 10 per cent lesser to maintain than even the Maruti Vitara Brezza. Taking all this into consideration, it seems that the EcoSport is all set to reclaim the limelight it received when it was launched in 2013.

While this, technically, is a mid-life facelift for the EcoSport, we have surprisingly little to write about, in this section of the review. The narrow slat that used to lie just under the bonnet has been deleted and the grill now moves higher up on the face of the EcoSport. The Ford logo now moves from the missing slat to the centre of the grill, like in the Endeavour and other Ford family cars of this generation.

The headlamps are larger and the round fog lamps below have been replaced by much larger triangular units. The bottom splitter has also received a mild redesign and the top-of-the-line Titanium Plus model receives 17-inch alloys. And that is essentially it; the sides and the rear of the EcoSport remain the same. That said, the EcoSport was always pleasant to look at and we can't fault Ford for not messing with a design that already works well.

One aspect of the EcoSport that has aged since it was introduced back in 2013 is the interior and Ford certainly has answered that call with this update. The new all-black interiors, spearheaded by an 8-inch touchscreen display are just what the doctor ordered. There's a new instrument cluster too, with a central display surrounded by gloss black inserts and a new steering wheel (with paddle shifts on the AT model) that has been lifted from the international Ford Focus.

The front seats are wider with better side bolstering and softer cushioning. The rear has improved contouring with softened cushioning, just like the front. And now, the back also gets a drop-down armrest with cup holders. Overall, the seats are both supportive and comfortable, which we can tell you after having spent a whole day behind the wheel with no fatigue at all.

Boot space remains the same at 346 litres, but Ford has made a few changes here with a new three position floor for the boot. The bottom most position gives you the most space, while the second position, that is about two and a half inches higher up, leaves a small compartment under the floor, that Ford says, can hide belongings, like a laptop bag, away from prying eyes. A slightly angled third position allows the floor to match the height of the rear seat backs when they are folded down, giving you one flat surface. In this position, you have a generous 1178 litres of space.

Another area that needed to be addressed was tech and with new competition from the likes of the Honda WR-V, the Maruti Vitara Brezza and the Tata Nexon, Ford has had to step up its game too. The EcoSport’s new touchscreen takes it right to the front of the pack in this regard. The 8-inch screen is bright and responsive and the third generation of Ford's SYNC interface is intuitive and easy to operate. It features the now obligatory Android Auto and Apple CarPlay as well. There are even two USB ports on the central to help charge your personal tech, along with a 12V socket.

The instrument cluster is also new, but it gets a rather odd looking information display. While it could have been better in terms of aesthetics, it does provide all the information you need and even includes a display for the tyre pressure monitoring system. The EcoSport also features rain sensing wipers and automatic headlamps but no sunroof or rear air con vents. That said, during our drive on a hot day in Goa with four people in the car, there was never any complaint from either of our rear passengers. Ford even claims that the air con will cool the cabin down from 50 degrees to 25 degrees in less than 15 minutes and we see no reason to doubt them.

Another nice feature in the top-end variant is the keyless entry system which features a sensor on both driver and passenger door handles. If you have the key in your pocket, the door will unlock as soon as you grab the door handle. Tap the handle when you leave and voila! The car is locked.

The EcoSport now comes with just two engine options - a 1.5-litre petrol and a 1.5-litre diesel. The petrol engine is an all-new 3-cylinder naturally aspirated unit. It makes a healthy 123PS of power and 150Nm of torque. This engine is more compact, lighter and is also claimed to be more efficient than the engine it replaces. Ford has gone to great lengths to quieten the thrummy nature of the 3-cylinder. There’s now a balancer to reduce vibrations and they even have the timing belt, which usually is open to the elements, running in an oil bath. At idle and start up, it still sounds like a typical 3-cylinder, but as soon as you get moving, it quietens down. It's really nice to drive at city speeds because all that power has been focused around low- to mid-range rpm and trails off at higher revs.

The 1.5-litre diesel makes the same 100PS and 205Nm as before, but has received a different state of tune. The difference is not noticeable though, and the diesel is still a very pleasant motor to drive, with a very linear torque curve and barely any noticeable step up in acceleration when the turbo kicks in. What has increased though, with this new tune, is the claimed mileage which has now stands at 23kmpl, a good 3kmpl more than earlier. The petrol also promises one more kilometer per litre at a claimed efficiency of 17kmpl.

Another new and significant change to the EcoSport package is a new conventional automatic transmission that replaces the more advanced dual clutch transmission that was earlier offered with the previous 1.5-litre petrol power plant. This new transmission may be old school, but the way it behaves is much more suited to the EcoSport. It's much better than the gearbox it replaces and at city duties, it feels quicker too. Shifts are butter smooth and though they are a little slower, they are much more predictable and you never feel unsure of what will happen when you punch the throttle. This allows you to get on with enjoying the drive and makes for effortless city commuting.

Ford says the only changes it has made to the suspension is to the bushes, but this seems to have made quite a difference in the way the car rides. It goes over bumps and speed breakers in a much more composed fashion and while the suspension is still quite sporty, i.e. firm, there is very little sound that makes way into the cabin. Only really sharp bumps like level changes and rumble strips make their presence felt in the cabin. But those apart, the EcoSport is a very quiet place to ride in. Even road and engine noise at city speeds is very nicely controlled and this makes for an even more comfortable experience.

Like all Fords, steering feel is excellent and this combines well with the sporty suspension setup around corners. There is still some body roll that comes from the tall boy stance and the short wheelbase, but it's still fairly well controlled. Together, they keep the sporty edge, that the EcoSport had, alive even today. What could do with some improvement though, are the Bridgestone Ecopia 205/50R17 tyres which don't feel as if they offer as much grip as we know this chassis can handle.

This is an aspect where the EcoSport scores well. Dual airbags and ABS with EBD come as standard across the range. You also get speed sensing auto door locks and the top end variant gets 6 airbags. Ford also offers the emergency assist feature, which automatically calls up the emergency services in the event of an accident. The automatic gets added tech like EBA, ESC, traction control and hill-launch assist.

The manual EcoSport is offered in 5 variants while the automatic is only available in the Titanium grade. The top-end Titanium+ variant gets 6 airbags (as does the Titanium AT), along with features like rain-sensing wipers, auto-headlamps and DRLs, but if it’s out of your budget, the Titanium is a value-for-money variant, with most, if not all the features the EcoSport has to offer.